Getting The Most Out Of A Trade Show

Being a teleprospector and working at home has many benefits, but one of the draw backs is not being able to see your fellow teleprospectors, your supervisors, and your main boss face to face. Four years ago, HMS decided to start annual companywide picnics for all of the HMS teleprospectors and their families, to join together and enjoy the day. Full of laughs, games and good food, this is one day where work is not the topic!

We had our 4th Family Picnic this past September 16th at Creve Coeur Park. Our pavilion was right off the ‘beach’ and the weather was astounding! We enjoyed several different types of food that was provided by HMS and its employees. HMS supplied the hot dogs and BBQ Chicken while the employees brought chili, chips & dip, pasta salad, desserts and many other delicious items. Many thanks to the company’s ‘secret weapon’, Jason, for grilling the hot dogs-which were pretty tasty and all who ate one actually survived! LOL

Many employees and their families attended, including one of our newest hires that just completed his first week with HMS. We are so glad that he and his wife were able to make it.

Many teleprospectors brought along their children, aged between 2 and 18 years! WOW we really had a wide range of ages in this bunch! Every child participated in at least one activity, but many of them had the chance to participate in multiple activities.  We had games and lots of arts and crafts to keep everyone busy, children and adults alike.

Just as with any other group activity, the highlight of the day of course was the games!

Some of the games involved only the children and we had a few that incorporated the adults as well.

Our nature scavenger hunt is always a great way to get the kids roaming around the park using their measuring skills, reading capabilities and eye for detail. The hardest item to find was a pine cone even though we were in a park. One kid suggested finding one at home and saving it for next year’s scavenger hunt. Some may call that cheating but I call it being proactive.

The potato sack and the 3 legged race was quite a sight especially since it was done in the sand! It is hard enough to run a race, but to have your legs in a sack and ON SAND! WOW, that was a lot of fun! I can personally say this was very exhausting but at least I was burning off some calories! One of our employees and his team mate kept falling so he eventually just picked the kid up and raced to the finish line. It didn’t count as a win of course but he definitely deserves an A for effort.
A true test of balance was our ‘Balance the Egg’ game. Everyone was allowed to participate and we actually had quite a few that joined in. The object was to balance a raw egg on a plastic spoon using your opposite hand and race to the finish line. The ‘secret weapon’ aka Jason, was very good at this and could have gone a mile if needed without dropping it.

Best of all was the egg toss (over the volleyball net) with the boss and then the newly found game ‘EGG the Boss’. Now where can you go to work that you actually get to EGG your Boss! Yep, you heard right, at HMS that’s where! 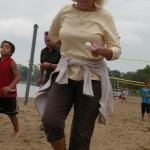 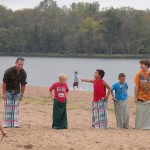 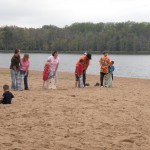 Employees as well as the children got the chance to throw an egg at a plastic wrapped Vicky! Everyone of course jumped at this opportunity and it was funny to see it was a kid that egged her first. (He’s the son of one of our new hires and the new hire tried disclaiming his son in order to keep his job) It was all in good fun of course so no jobs were at stake, or lost…haha. This game will definitely make a comeback next year!

As the day wound down Vicky gave out numerous attendance prizes that included gift cards for restaurants and the movies. All of the children were awarded Subway gift cards for being such good sports and testing their athletic abilities in the sand. It was a great time and I can’t wait to see what will happen next year. As the tradition continues, Hudson Management Services continuously keeps finding ways to bring outside work into the home, as well as tries to keep this company “like family”.